Skip to content
WHAT IS OZONE ?
Ozone is a poisonous gas made up of molecules consisting of 3 oxygen atoms.
It is denoted by O3.
Ozone is extremely rare in the atmosphere accounting for just 3 out of 10  million molecules.

Most of the ozone exists in the upper atmosphere or the stratosphere ( 12 to 50 km ).

The ozone layer is essential for the existence of life on Earth because : –

When the ozone layer gets depleted due to ODS , radiation reaches the Earth’s surface which results in the increase of various diseases like : –

The ozone layer is observed mostly over the Antarctica during 1980’s. 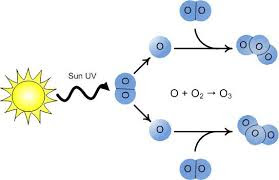 WHAT WAS CAUSING OZONE LAYER DEPLETION ?

In the 1970-80’s , Scientists discovered CFC’s broke apart in the atmosphere and released Cl atoms.

This caused the ozone layer depletion which was caused by the human activities.

The same result was observed when : –

Br atoms were released by halons.

ODS are the substances responsible for the degradation of ozone layer .

Strong winds in the stratosphere over Antarctica form an enormous ring of moving air called the polar vortex.

Special reactions that occur in PSC’s combined with relative isolation of PS : –

Some international protocols were considered to reduce the impact on ozone and they were : –

Human activities are responsible for all the environment loss.

We should control our actions in order to protect : –

Industries, use of vehicles should be limited.

This is because they emit large amount of gases into the atmosphere.

To promote sustainable development it is necessary to control our emotions and needs.

WasteShark – The solution to tackle waste

Why are oceans important ?